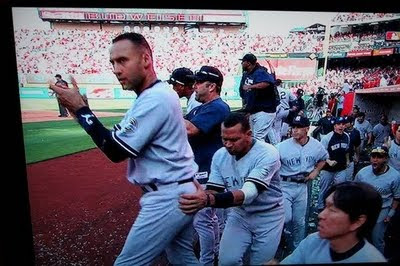 What post-mortem examination do the 2009 Red Sox deserve? The simplest and most deserving explanation follows that the Red Sox simply went as far as they deserved.

A team created to be balanced failed to show balance...underachieving on the road, including a dismal road show in Anaheim.

Overall the team went 95-67, but let's look inside the numbers.
Why can't the team perform on the road? If there were a simple answer, you'd expect ownership and management to know it. The Sox had an OPS of .753 on the road, and only one AL team, the Yankees had an OPS over .800 on the road. Six AL teams had OPS exceeding .800 at home, including the Red Sox, leading at .862. For all the sturm and drang about Yankee Stadium, the Yankee OPS only increased .036 at home, compared to the Sox' .109.

The tale of the tape for pitching is a bit surprising, with a .736 OPS against at home and .779 away. In other words, the Sox not only hit better at Friendly Fenway, but also pitched better.

Upset? Not really, as perhaps Red Sox Nation's "need to win" has lessened in the wake of a pair of World Series crowns. In other words, the sense of urgency isn't so great. "We haven't won a title in two years."

Maybe worse than the early playoff exit is the reality that the Sox, for the most part, don't generate much excitement. It wasn't as though everyone had a career 'down' year. V-Mart, Youkilis, Gonzalez, Bay, Ellsbury, and Drew all performed at least to most people's expectations. Pedroia and Lowell were at least adequate, and David Ortiz had half a season after struggling mightily.

But overall, the lineup inexplicably struggles to 'create' and 'prevent' runs on the road. With a largely 'mature' team, the Sox can't lack the knowledge on how to get it done on the road. Yes, we've heard of Sox past burning the candles from both ends, but again, that dog don't hunt. At least let's hope not.
Posted by Ron Sen, MD, FCCP at 6:40 PM 1 comment: