Not much to talk about these days in MLB. So, we'll have to go with some randoms...and a non-Sox memorable video.

D-Lowe making the rounds in the Globe today, courtesy of Nick Cafardo. The current Sox rotation is obviously up in the air, pending health concerns and trades. The choices for now?
If Masterson pitched similar to his level of 2007 (starting), I think it would be reasonable to think he could win twelve games or more. What is the incremental win total for Derek Lowe likely to be for the extra tens of millions? Probably three to five tops.

The Manny Watch. The Boston Globe suggests that Boras might want Teixeira on the Sox, Sabathia and Manny to the Angels, and Lowe to the Yankees to maximize salaries. Apropos of nothing...Did Manny really take the radio out of his expensive car BEFORE he sold it? Well, the guy can really hit. 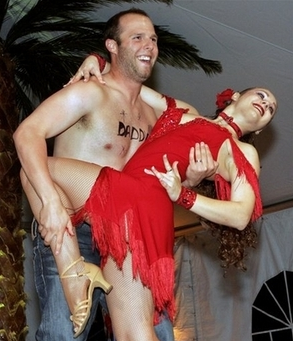 He sees the fire that's driven Daisuke Matsuzaka since he was in high school. He sees it in Josh Beckett, embarrassed by a 5.01 ERA as he works on his changeup to move hitters' feet and his two-seamer to alter eye level. Farrell sees it in Jonathan Papelbon, and believes Jon Lester may have the greatest drive of them all.

Nothing great ever gets achieved without enthusiasm.
Posted by Ron Sen, MD, FCCP at 11:47 AM No comments:

The economic backdrop has resulted in a glacial start to the free agent market...unless one considers Damaso Marte and Jeremy Affeldt as an avalanche. Ryan Dempster obviously is the exception, and nobody doubts that the premium class of Mark Teixeira, C.C. Sabathia, and Manny Ramirez will get paid.

But how many major corporations, lining up at the public trough in Bailout Nation will be plunking down megabucks for luxury boxes and blocks of season tickets. And if they do, should we, socialist sponsors of their profligacy, scream bloody murder. Should the employees of AIG whose annuities evaporated watch the fat cats sit in luxury boxes and get 'retention payments'?

First, let's understand that major league baseball owners are extraordinarily wealthy, competitive people who want to win but live by the rules of Warren Buffett:
Most likely hold a diversified investment portfolio. Here is a list of some asset classes sorted by year-to-date results. At the top, Japanese Yen, in the middle the SP500 down 40 percent, and at the bottom the India Fund, down 73 percent. Hard not to lose money under those circumstances. 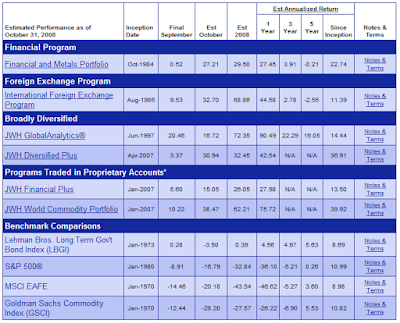 However, some hedge funds, like John Henry Investments have performed spectacularly in a difficult environment.

But I digress. Who among us will not feel the slightest schadenfreude if some free agents get the Jody Reed treatment? As I recall, the Sox offered Reed ten million over three years, and when the smoke cleared, the offer disappeared and Reed never came close to that again.

Of course, he made more money than most of us could ever dream of making, so he gets the last laugh anyway.

Let's examine the case of Derek Lowe, who 'desperately' wants to come back to Boston. Lowe has won in double digits for the past seven seasons, but is not far over .500 for his career, but has had a good WHIP in the National League. Lowe turns 36 next season.

Lowe has a reputation as, to be kind, having a minimally high character. Now this might not separate him from the majority of the descendants of "Ball Four", somehow I want to believe that his presence amidst Dustin Pedroia, Jon Lester, Jacoby Ellsbury, Justin Masterson, Michael Bowden et al. sends the wrong message. Didn't John Henry want Lowe exiled after his previous Red Sox tenure? I could be losing my mind.

Frankly, I'd just tell Derek "we want you, not so much" and move on. I'm gonna put my eggs in the Bowden basket. There is nothing more important to achieving greatness than wanting it and working toward it.

Here's an excerpt from "On Bowden" referenced above...“If all the players we had were Michael Bowdens, we wouldn’t need coaches,” Beyeler said. “That’s the kind of kid he is. He is so driven. He’s the first guy here, he’s the last guy out every day. He’s here to get better, every day he’s here. You ask him to do this, he does that, every bit and more. You never know he’s around, to the good point. He takes care of his own business. He’s the guy, every time you turn around, oh, Michael’s working. Oh, Michael’s doing something to get better. Oh, he’s doing this. He’s doing pick-off drills, towel drills. He’s constantly doing something that benefits where he’s trying to go."

I remember reading Peter Gammons about another Sox prospect who needed to be great...Jon Lester.
Posted by Ron Sen, MD, FCCP at 9:59 AM No comments:

Dustin Pedroia capped a stellar season by receiving 16 of 28 votes to capture the American League Most Valuable Player award. Pedroia became the de facto team leader during the season with bot a spectacular offensive and defensive season.

Remarkably one scribe, Evan Grant of the Dallas Morning News omitted Pedroia from any of the ten choices available on his ballot. On WEEI, Grant said he relied on statistical data concerning run production.

Here are the raw data on Pedroia.
You can easily argue whether Pedroia deserved to be the top choice among others with outstanding seasons. These include Youkilis, Quentin, Hamilton, Morneau, K-Rod, Longoria, Sizemore, and so forth. But to have the obligation and responsibility to vote for the MVP (not exactly finger on the nuclear codes, but something) and totally omit Pedroia is laughable.

The writer clearly doesn't understand the statistics or had a personal vendetta against Pedroia. Did he have Ian Kinsler's back or did Pedroia fail to grant him an interview on a bad day?

Clearly, we are forced to view Grant as having temporary amnesia, or wonder if he really knows baseball. Many Rangers fans ask the same questions.

Evan, how the heck do you explain this?

Less than a week ago Pedroia was fourth on your ballot. Why was he left off now? I'm really sincerely curious how you could be so think. Please explain to all of us.

Fired Up. Ready to Go.

Well, maybe not so much.

The Red Sox have needs (like all teams), and what they don't need is thirty million (three by ten) reasons not to start on a more permanent solution to the catching position.

If Varitek walks, they can turn the draft impact into more young pitching if they need to trade a young pitcher.

As for the Teixeira sweepstakes, I'm willing to wait for Lars Anderson who is coming fast...but of course, the Sox should drive up the price for the Yankees or the Angels, although they tend to be a take it or leave it negotiator. Certainly, the addition of Teixeira would be a great addition, and the Sox have some money coming off the table (Manny, Varitek(?), Schilling), Timlin, Lugo(?)). 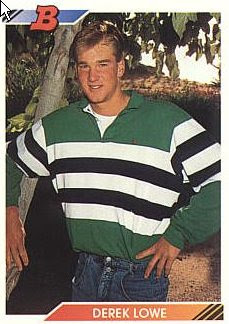 As for the return of Derek Lowe, don't hold your breath. Consider the quote from Coyote Ugly, "Because, the average male is walking around with a toddler inside his pants, a two year old right there inside his dockers..."
Posted by Ron Sen, MD, FCCP at 4:51 PM 1 comment: