State of the Nation

Red Sox fans have become something akin to those brainwashed to hear the rants of their favorite political party.  And one has to ask whether the Red Sox media coverage has become equally culpable.

The Sox have made a lot of moves this offseason. But as John Wooden reminded us, "never confuse activity with achievement."

The cornerstone move of the offseason was coming to an agreement with Mike Napoli. Napoli (when healthy) has been a productive player, received selection to one All-Star team, and among his 'similarity scores' has the immortal Duke Sims. All that being said, he's in medical limbo, as both parties work out contract terms after a hip issue appeared during his physical. In other words, the Sox "big" move is as yet not signed, sealed, and delivered.

Beginning 'up the middle' the Sox have a platoon catching situation with hopes pinned on the apotheosis of David Ross. Sox scribes have been pumping Ross' tires hard...Kelly Shoppach is one of the similar players to David Ross.

Sox fans have no gripes with perennial grinder Dustin Pedroia, who will have his annual replacement shortstop in Steven Drew.  We can only hope that the Drew move works out anywhere close to as well as the Adrian Beltre contract year in Boston.

Is the Sox' rotation good enough to compete in a division with the Yankees far superior rotation, Toronto's rebuild, and the ever-changing Rays?  The projected starters of Jon Lester, Clay Buchholz, John Lackey, Ryan Dempster, and Felix Doubront.  Peter Gammons used to tell of Lester's burning desire to be great.  Is that Lester the same guy?  Buchholz appeared to separate from the problem duo of Josh Beckett and Lackey. Dempster is a .500 pitcher who has struggled in the AL (never mind the AL East), Lackey comes off injury, and Doubront had a 2012 that he can build off.  But it looks like a rotation with at best a pair of 'twos', and three 'fours'. No offense, but Lester and Buchholz don't remind me of Koufax and Drysdale.

The Sox have promise at third with Will Middlebrooks, an expected platoon of Gomes and Kalish in left, and an overpaid Shane Victorino in right. The 'Glory Days' saw Rice, Lynn, and Evans in the outfield with a cameo from Yaz in left. . Gomes, Ellsbury, and Victorino are decaf to that trio.

The Sox are relying on statistical overachievement to allow them to compete. Sure, that might happen, but I wonder whether season ticket-holders are buying that.  The Baseball Operations guys have all the tools like Win Shares and Wins Above Replacement (WAR) to guide them, but I wonder if they have more faith or more hope.

If somebody asked you who had the highest WAR among Red Sox pitchers in 2012, you'd have to be Nostradamus to know. For those who didn't click through, the answer was Junichi Tazawa and Scott Atchison with 1.7.

The old saying goes "money can't play."  Sox fans are expected to pony up among the highest dollars per game.  Red Sox management can't claim that you get what you pay for.

WAIT! Did the Sox get the message, or is this the continuing disinformation spin coming from Yawkey Way?

The Sox, never to be outdone (or outspun) have concocted a Herman Cain-esque 13-13-13 plan, as if they don't have enough bad luck going to disparage triskaidekaphobia (spelling bee losahs groan here). The locals have negotiated with Ryan Dempster career 4.33 ERA with AL ERA over 5 last year, Shane "Better Days" Victorino, and Mike (My Aching Back) Napoli to low-term, high pay deals, although Napoli's is still pending. Google "career .500 pitcher", and there's a great chance Dempster is your poster child.

But is this off-season charade about reloading or posturing, as the posers hope for lightning in a bottle while drunk-dialing agents (fried chicken and beer being the near official foods of the Boston Red Sox) addicted to the number 13?

I'll acknowledge that I KNOW NOTHING. After all, I snickered when uber-agent Scott Boras suggested Jacoby "Mirror, Mirror" Ellsbury could get twenty million dollars a year. And I don't think that he meant TEN adjusted for playing half a season.

In a market that overpays mediocrity with astonishing regularity, anything is possible. Anibal Sanchez has a sub .500 career record, and just scored EIGHTY million dollars from the Detroit Tigers for five years. Clearly, when the numbers got over THIRTEEN, the Sox folded like an accordion. And by the way, Sanchez's next win will bring his career totals to 49.

By comparison, Ray Culp won 122 career games, Spaceman Bill Lee 119, and Reggie Cleveland 105. At age 28, Lee "fleeced" the Red Sox for 80,000 dollars as a pitcher who won 17 games and had a WAR of 2.1. Is Anibal Sanchez materially better than any of the aforementioned trio, or has Reefer Madness descended upon all of us in age of changing drug policy?

I won't pretend that I will forswear baseball in 2013, waiting for the anointed Killer B's of Barnes, Bogaerts, Bradley, and Brentz. But I remember waiting for Kevin Romine, Chuck Rainey, Win Remmerswaal, and Brian Rose. Maybe we'll someday see the Sox kiddie corps in a Major League all-star game or if unexpected longevity occurs for us, Cooperstown. But I'm not holding my breath.

As currently constituted, are the Sox any more than breakeven favorites to outpace the Orioles for fourth in the AL East behind Toronto, New York, and Tampa? Have the Red Sox led by Larry Lucchino and erstwhile surrogate Ben Cherington sucker-punched us all? It sure feels like it to me. If I want "Character Approved" I'll watch USA Network.

Chicken or the Egg

The Red Sox continue to cobble together a roster.  Only time will tell to what extent it works.  First, the record last year speaks for itself.  The team played poorly, trailing early and often and seldom showed any heart.

The easiest approach is to blame the manager (V who must never be named), and nobody would credit him with anything except survival. But the word on the street described  a team lacking discipline, clubhouse disorder, a few disciples of Bacchus, and divas whose performance never came within shouting distance of underperformance. Look, we outsiders can't name names, and local scribes can't realistically do their jobs if they call out players. Some will argue that a bad team reveals bad men. Others note that the lack of character produces bad results. You be the judge.

Additionally, too many players lacked 'respect' for the manager, and in fact, we hear that players (specifically pitchers) feared new manager John Farrell, and that the position players had no problem with that.

I don't think that the Red Sox are done.  Leo Durocher is remembered for "nice guys finish last," and we remember Reggie Jackson and Billy Martin scrapping in the dugout. But whatever their problems, the Yankees played hard...and well...and last year the Red Sox did little of either.

Other factors are 'at work', too. I get it. A player who gets ten million dollars a year doesn't have to care what anybody - fans, teammates, manager, writers, or especially bloggers think. But they call it "professional baseball" both because of the talent level and the demand, the grind of the long season that is quantitatively different than many other sports. Players who don't commit to the highest level of conditioning, to embracing sports psychology, nutrition, getting adequate rest, and improving their game (bat speed, arm strength, reducing defensive miscues and errors) are cheating the game, and disrespecting themselves.

You can create an environment for success, but you can't force players to care.  Last year's roster became the definition of FRAGILE, falling apart when subjected to stress and volatility. Few players, such as Cody Ross and Dustin Pedroia, emerged with reputations intact or enhanced. Replacing dysfunctional characters with character is a start, but only a beginning.

I haven't written anything about the Red Sox lately. That's probably certainly not much of a drag on society.

First, we mourn the passage of Marvin Miller, who literally made today possible. By limiting the available supply of free agents via the '6- year rule', Miller and the MLBPA produced a supply-demand imbalance for free agents, leading to exponential baseball salaries. Can you blame players for being overpaid, or simply recognize the fruition of Richard Thaler's "The Winner's Curse?"

But the baseball Winter Meetings have come, and the Red Sox unleashed a flurry of 'activity', reminding me about John Wooden. As you know, the Wizard of Westwood said, "Never confuse activity with achievement."

After trying to rebuild the Sox of yore with right-handed power, albeit base-clogging, with Jonny Gomes and Mike Napoli, they opened the vault to sign Shane Victorino today.

Baseball-reference.com shows us who Shane Victorino is...or to whom he is likened. 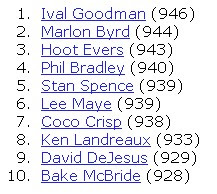 These gentlemen are 'not exactly' Murderer's Row.

Of course, part of the problem is the money. Players are judged not on ability or production, but utility per dollar. Frankly, I'm skeptical that big money for Victorino gets you so much more than Ryan Kalish produces.

Yes, the secondary argument goes that Victorino replaces Jacoby Ellsbury when he leaves for greener gra$$. And the way the Sox are throwing around money for mediocrity, maybe Scott Boras is right, and Ellsbury will get 4 by 15 million or more.

Some of you may have read (or are reading) Nassim Taleb's new book, "Antifragile", in which he explores that which can suffer or prosper from volatility or stress. I fondly recall that Mark Belanger, a career .228 hitter, hit .287 in 1969 for the Orioles. In other words, players can have production at considerable variation to their average.

Restated, several Sox players could produce at higher than expected norms, and produce a competitive season. Of course, we are also left with Damon Runyan's caveat that "the race is not always to the swiftest or the battle to the strongest, but it pays to bet that way."

And therefore, the Sox have plugged the holes in the Fenway dam. But relying on statistical anomalies, rather than better talent strikes me as fradulent. But maybe as Jerry Maguire would say, because "we live in a cynical world."

And, oh yes, we haven't discussed the broken pitching staff. Maybe another day.