Johnny Damon turned down the Hub for the Motor City. Can't you see it now? The Dan Shaughnessy column comparing Boston and Detroit, yada, yada, yada.

Player A has over 400 at bats this season. Player B has 255 at bats. Player A can't throw the ball better than my 22 year old daughter. Player B is a competent outfielder defensively. Player A has simply moved on from the Red Sox and Player B is trying to establish himself as a permanent professional ballplayer.

Player A doesn't want to be in Boston and Player B appreciates the opportunity. Player A is Johnny Damon and Player B is Darnell McDonald.
Posted by Ron Sen, MD, FCCP at 10:26 PM No comments:

Have you been paying attention? Tonight Ryan Kalish played center field for the Sox. His box score (3 0 0 0) does show much of an impact, does it?

Early in the game, Kalish fielded a base hit into the gap and gunned the runner out at second, possibly saving a run. Historically, we've had some weak arms in center (Damon, Crisp, Ellsbury), so this is at least a temporary upgrade. Later, with runners on first and second and no out, he executed a sacrifice bunt perfectly, advancing the runners, who then scored on a Scutaro single.

So, with "nothing" in the box score, Kalish made a significant contribution both offensively and defensively. Seeing is believing.
Posted by Ron Sen, MD, FCCP at 9:29 PM 1 comment:

I'm not on the bandwagon, analytically anyway. But the 2010 season hasn't been all negative. If the season is a marathon not a sprint, then so we ask whether younger blood might help carry the team forward.

Assessing the "youth" by position (ignoring the established 'younger' veterans in Youkilis (1B-3B) and Pedroia (2B), the Sox have (through the system) established more prospects.

Realistically, the Red Sox aren't buried, but are they dead? 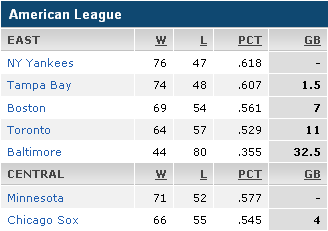 If the Sox don't beat Toronto the next two games, then Theo Epstein should think the unthinkable, sell 'em off. If you're not going to make a max effort to re-up Beltre (likely 4 by 60) and Martinez (maybe 4 by 10) and pay Papelbon 10 million (a total of 110 million), then maybe the Sox go into selling mode, in order to retool for 2011.

Among Beltre, Martinez, and Papelbon, you should be able to get useful if not premium pieces, as you're not selling off junk, realizing that what you're not trading is quality but not duration, as you don't have a lot of control.

C - Saltalamacchia and wait for your prospects
1B - Adrian Gonzalez for Ellsbury, Casey Kelly, and another piece.
2B - Pedroia is healthy
3B - Youkilis slides to third base.
SS -  Scutaro for another year, with prospects in the pipeline
LF - Kalish
CF - Cameron, while you wait
RF - Drew, last year of his contract
Extra - McDonald, earned a ticket back with a raise
Extra - Lowrie, with a chance to compete for the shortstop job
DH - ah, there's the rub...do you extend Ortiz

The bullpen reclamation seems to be an annual issue, and the Papelbon question is a huge overhang, both structurally and financially. The trend is negative, although he's still a young guy.  They could try to move Matsuzaka to the West coast, but are they going to get value for a guy who could win 15 games a year for a couple of years?

The free agent market is a bit thin, with the prime piece Albert Pujols, who isn't going anywhere. Carl Crawford would be an attractive acquisition, and the Sox should have a lot of money coming off the books (Lowell, Varitek, Wakefield, Beltre, Martinez, Hall). Obviously, if they're willing to part with Casey Kelly, then they'd be able to at least enter the Gonzalez sweeps.

Sox fans will miss the classy veterans Mike Lowell and Tim Wakefield, but realistically need to get younger and more athletic.

Developmentally, the Sox are waiting on Anthony Rizzo (1B) who has apparently moved ahead of Lars Anderson, the Navarro-Iglesias battle for shortstop, and it's hard to expect Anthony Ranaudo to be ready before late 2012 at the earliest. Do the Sox have any power-hitting outfielders coming through the system and what's their alternative?

I've done my own surveys, and Sox fans are ready to accept reality and move on. Can you?
Posted by Ron Sen, MD, FCCP at 9:39 PM 1 comment:

The Glass is Half Full

How do you classify the 2010 Boston Red Sox campaign to date? Any answer has to be qualified, but how does this differ from any baseball season?

Success and failure in baseball depends on many factors, including the proverbial 'bad bounces', health and injury, as well as over/underproduction by players, coaches, and management.

Although the franchise has a fiduciary and 'moral' duty to win every year, even Theo Epstein acknowledged 2010 to be a 'bridge' year.

Transactions have to be judged over the long haul. So far, the insertion of numerous fill-ins, ranging from Darnell McDonald, Daniel Nava, Eric Patterson, and most recently Ryan Kalish has overall exceeded expectations. Adrian Beltre has simply been a revelation. Few Red Sox in their wildest dreams could have anticipated the contribution of Bill Hall, and Marco Scutaro has for the most part stabilized the shortstop position. Acquiring Jarrod Saltalamacchia at lottery ticket prices gives the Sox additional flexibility in the off-season.

Conversely, the bullpen has often been fragmented, Mike Cameron can't be awarded a grade other than incomplete, and aside from April, Jeremy Hermida looked like Tarzan and played like Jane. The free agent gem, John Lackey, has pitched inconsistently and in bad luck at times.

We have to remember the front office's patience with promising arms like Jon Lester and Clay Buchholz, both of whom would be top of the rotation starters for every team in baseball. Daniel Bard has a trajectory that places him just outside all-star status. Felix Doubront has shown himself to be more a prospect than a suspect. We can only hope that Josh Beckett regains the form and consistency that marked his early career.

How could Terry Francona receive anything except for consideration for AL Manager of the Year? He has worked with an inconsistent lineup, an underachieving bullpen, and simply kept the team either in or at the fringes of competition with two hands tied behind his back.

John Farrell seems next in line to inherit a major league managing job. Numerous Sox pitchers have developed new pitches (e.g. Lester and Buchholz with the cutter) and it's difficult to know how much impact pitching coaches can have on grizzled veterans.

Tim Bogar might be the salt of the earth. I don't know him, but overall the "send 'em in, Tim" approach recalls the Wendell Kim era. DeMarlo Hale excelled at the third base coaching job, and if the season has anything worth saving, maybe he belongs back there.

I call this the Mark Belanger category. Belanger played in six ALCS and four World Series, all the while hitting a career .228. Yet in 1969 he hit .287 and he won eight gold gloves. Belanger didn't always hit, but he certainly knew how to help his club win.

How much of these 'categories' reflect "randomness' versus 'trend' is questionable. My sense is that any objective categorization of Jonathan Papelbon's career would show 'negative trend', based on blown saves (maybe random), WHIP ratio (nonrandom), and strikeout to walk ratio (nonrandom). I'd be inclined to assign Beckett and Lackey to randomness. Is Adrian Beltre the Seattle underachiever, the Boston overachiever or someone in between? These are the decisions that management has to wrestle with in planning future contracts, acquisitions, trades, and disposition.

The players who have 'helped' themselves most this season are: Beltre, Hall, Kalish, McDonald, Bard, and Doubront. Nobody can label Lester or Buchholz as surprises, because as Yogi Berra would say, "you can see a lot by just watching".

Overall, with 50 odd games left, the Sox still have a chance for the playoffs. All things considered, the glass is half full...if you're drinking the Kool-Aid.
Posted by Ron Sen, MD, FCCP at 6:13 PM No comments:

The Red Sox continue to confound and confuse. To their credit, they haven't gone into the tank when they could with major injuries at C (2), 1B, 2B, LF (2), CF, and P(Beckett, Matsuzaka). Conversely, the 'run prevention' strategy hasn't materialized, with continual bad fielding, bad judgement, and inconsistent relief pitching.

Now for the gratuitous comments:

Sox fans bemoaned the loss of Jacoby Ellsbury. Who's crying now? Getting your timing back mid-season isn't so easy.

The biggest loss from here out is...Kevin Youkilis, one of the top five offensive players in the AL (really).

Morrow has a no-hitter today...if Dustin Pedroia's playing second base for Toronto.

J.D. Drew has the capacity to carry a team for a month...if he gets hot. Right now? Not so much.

If the Sox WERE to lose the next couple of games to the Yankees and struggle, would they become SELLERS...the logical 'bait' would be Adrian Beltre, Victor Martinez, and maybe Jonathan Papelbon.

Has Felix Doubront moved ahead of Casey Kelly in the prospect ranking? (Hate mail starts now). Kelly's last 8 starts: 43 IP, 53H, 28 ER, 14 BB, 34 K. ERA 5.86. Well, the K/BB ratio is good, but the WHIP isn't. He's probably working on stuff, because the process is as important as the outcome at this point.

This game just has a bad feel to it.