Usually the format might address the questions or uncertainty facing a team. As a precursor to a more thorough dissertation on why the Sox will prevail in 2009, I'll supply some answers.

Health. Trading in excuses doesn't either bring victory or relieve the 'pain' that fans experience. But injuries have a way of disturbing man's plans. Last season critical injuries to Josh Beckett, Mike Lowell, David Ortiz, Curt Schilling, and J.D. Drew cost the Sox dearly. With the exception of Schilling, we can expect more normal performance.

Of course, the Sox will have a cadre of recovering commodities in 2009, including Julio Lugo and Jed Lowrie, Takashi Saito, and Brad Penny.

The best man will win. Jed Lowrie proved to be a reliable defender and a solid offensive contributor until a wrist injury betrayed him. Julio Lugo, he of the big paycheck, will get the first shot to unseat the new incumbent.

The Red Sox don't have a performance-enhancing drug problem, until they do. We don't know whether any current or former Red Sox are on the positive test list, but it's reasonable to presume that some are.

Surely we can all think of some players whose physiques "emerged", although we can only speculate whether they became gym rats or laboratory rats. But we'll surely admit a 'wink-wink, nod-nod' culture existed, and the pair of Giambi homers in Game 6 of the 2003 division championship aren't coming back.

So far for the Sox it's Camp Tranquility, with the New Guys blending seamlessly into the picture, Theo and Tito holding court, and players looking forward to the routine and marathon.

What are the question marks?
Baseball involves the sum of run production and run prevention, with the vicissitudes of 'fortune', that determine (along with relief pitching) the outcome of one-run decisions. And who can know the seeming randomness that explains the underachievement or outperformance that explains how .220 hitters can hit .280 and .300 hitters hit .26o?
Posted by Ron Sen, MD, FCCP at 8:52 PM 2 comments:

Be Careful What You Wish For

Someone leaked Alex Rodriguez sins, and fans are quick to vilify the Yankee third baseman as being a 'user' and cheat. But A-Rod is just one of more than a 100 major leaguers to test positive, and Red Sox players, past or present are almost certain to share guilt of substance abuse.

The Performance-Enhancing Drug (PED) moniker seems designed to sanitize the transgression of violating the spirit of fair play and competition. But in an industry whose revenues and salaries have skyrocketed, cheating simply became engrained.

Speculate on which Sox players might be involved. Privately, I have my suspicions about outperformance and body changes, but that's about it. Would most of us take the health risks of drug abuse for a salary tens or hundreds of times what we now make? Hard to know, but not easy to dismiss out of hand.

Do I feel sorry for Rodriguez because his confidential test results were leaked? Who among us would want anything confidential about us released? Nobody.

Will A-Rod make the Hall of Fame anyway? Unknown. What we can say is that the legend of the greats, Aaron, Ruth, Mays, Frank Robinson and others grows with each release of new cheats.
Posted by Ron Sen, MD, FCCP at 11:23 PM 1 comment:

You can't always get what you want. The Patriots didn't even make it to the playoffs, although I'm expecting a terrific football game today. Can a short passing attack by the Cardinals neutralize the Steelers?

Jason Varitek wasn't the loser in the negotiations. Can you name any other profession where he rakes in five million bucks this year doing? The sportswriters, broadcasters, bloggers, and unctuous doctors who say otherwise can simply envy Varitek's bank account. 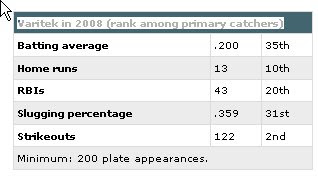 This chart from ESPN.com shows that Varitek got paid for his intangibles. But he got paid. Frankly, I'm more disturbed that he reportedly can't understand why he got a pay cut.

Varitek's signing certainly makes Terry Francona's life easier. Of course, he may need to pinch hit a lot more often for anybody with a plus fastball who can throw it past the left-handed hitting Varitek (see strikeout data above). Varitek fanned 102 times in 328 appearances against right-handed pitchers in 2008 with an anemic OPS of .616.

How will an economic turndown of biblical proportions NOT affect major league baseball. The 'staycation' mentality boosts companies like Netflix, where you can get a year of entertainment at less expense than a monster seat ticket to watch Kansas City. And you have to wonder why the Royals paid Kyle Farnsworth a king's ransom, to be Kyle Farnsworth...a sub .500 reliever who defines mediocrity statistically. Maybe he's a great guy, or an investment genius.

Many professional athletes (like many Wall Street professionals) simply don't get it, incredibly blessed to be making a fortune playing a game.

Ray Allen can enjoy working on his golf game and healing some aches and pains instead of going to another All-Star game. Nothing wrong with that.

Plenty of productive offensive players still out there, including Manny (not walking through those doors again), Bobby Abreu (reportedly considered the worst right-fielder in baseball by some statistical services), and Adam Dunn. Pat Burrell's contract with Tampa set the bar a lot lower.