Unintended Consequences of the Blue Plague

While the appealing, simple answer is a catching problem, that's a gross oversimplification. Criticizing officials usually comes off as petty and prejudicial, but is anybody watching?

Missed strikes have massive, often imponderable consequences. Often an error or a defensive miscue (such as the Angels' misplays by both Hunter and Bourjos last night, can trigger not only a rally, but higher pitch counts and longer innings. Last night Jon Lester (not Saltalamacchia) got repeatedly 'squeezed' by Larry Vanover. My sense was that Lester wasn't getting the low strike. As a result, Lester had a much higher pitch count early, which taxes the bullpen, and triggers a cascade of consequences.

Over the longer haul, the wear and tear on both the starters and the bullpen has meaning. The biggest meaning is more frequent appearances for the perceived 'reliable' relievers. 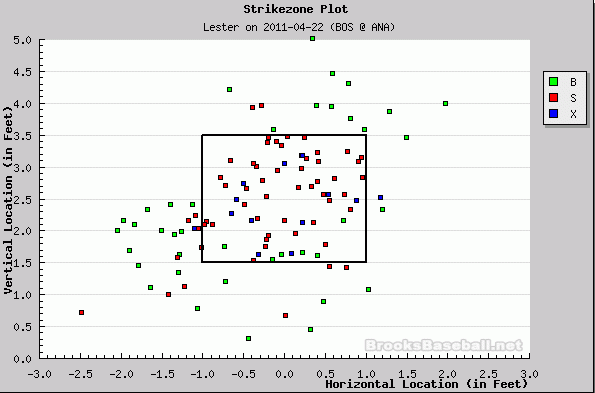 Here's the Pitch fx plot. You can see the number of  green boxes (called balls) in the bottom of the zone. Pitch fx argues that Vanover had a very tight zone low, but an impact on Lester's "best" pitches.
Posted by Ron Sen, MD, FCCP at 5:26 PM No comments:

The Red Sox win game after game, well, maybe something like that. Does your food taste better today, and maybe the dog can come out of hiding?

The Toronto Blue Jays came into town, with the curse of John (Jack?) Farrell. It was Jackie Robinson Appreciation Day, or a reasonable facsimile.

The Sox couldn't take advantage of a three-run jack (home run) taken away on replay, despite a pair of jacks of their own, a solo shot by the soul of the team, Dustin Pedroia and a two-run blast by Kevin Youkilis.

Quicker than you could say "Jack Robinson", the Jays rallied against Clay Buchholz, struggling with his command, and they hijacked the game against Bobby Jenks, while the home plate umpire couldn't find the strike zone with a Lojack, guide dog, or a white cane. Frankly, Kerwin Dantley looked like he was challenging Pitch-Fx low accuracy records.

Maybe it's the curse of Curt Young or did Matt Young show up instead?
Posted by Ron Sen, MD, FCCP at 10:17 PM 1 comment:

I'll preface my remarks by saying that I was a very MEDIOCRE Division I baseball pitcher (think Moonlight Graham) and pitched for five years in the Intercity League. That doesn't make me an expert on pitching, but considering that I occasionally got people out with pretty MEDIOCRE stuff...

The old saying goes that hitting is about timing and pitching about disrupting timing. The old Ray Miller adage about working fast, throwing strikes, and changing speeds won't ever go out of style. Blaming the catcher (Saltalamacchia) for Daisuke throwing middle-middle is just...crazy. The Red Sox have tried to remake Matsuzaka, and I'd just let him pitch how he pitches and live with that. GOK that the current situation is untenable.

Let's face it, last night was a disgrace. I don't know how long you go with ineffectiveness. My guess is that with a terrible record, it won't be long before Aceves gets moved into the rotation. Although Tim Wakefield hasn't been great, at least he gives you innings.

If you don't like how the catcher calls the game, then you take it out of his hands and move it to the pitching coach.

Everyone on the Sox is pressing currently, and few players are playing to their potential, even with the small sample size. You don't have to point to Saltalamacchia to find ineffectiveness, as the team has a host of players struggling.

You Can't Win 'Em All

The Yankees lucked out with four home runs, none actually leaving the Bay State, while the Sox banged out ten hits, denying Ivan Nova his second win of the year.

Tim Wakefield tossed a pair of scoreless innings and the speedy outfield combination of Jacoby Ellsbury and Carl Crawford now have a combined average of .308.

Jarrod Saltalamacchia threw out Derek Jeter stealing, although the future Hall of Fame shortstop raised his average to .233.

The Yankees no doubt feel fortunate to have evened the season's series.
Posted by Ron Sen, MD, FCCP at 9:42 PM 1 comment:

The Red Sox aren't unique concerning bad starts. Plenty of teams have had abysmal starts but few have had as disappointing a start as the Boston Red Sox version 2011.1.

Why?  I'll start with the obvious and speculate about the less so.

1) In every sport, you've got to play well to win. The Red Sox played terrible baseball in Texas, and didn't look much better in Cleveland. Whether you want to emphasize balance, run production, or run prevention there hasn't been much of any.

2) Starting pitching. Up until today, the Sox hadn't generated a single quality start. Quality starts (statistically) correlate with winning about two-thirds of the time, and are a meaningful statistic.

3) Anemic offense. After six games, the Sox have scored sixteen runs. That's not much of a sample size, but insufficient to win in any league. The old John McKay line applies, when asked about the execution of his team he replied, "I'm in favor of it."

4) Pressure. Are players starting to press individually and collectively because of a poor start? You have to wonder if the most important guy in the locker room is the sports psychologist, because the mental toughness factor hasn't shown positive thus far.

5. Preparation. Spring Training, frankly, felt like a joke. We heard how it doesn't matter, that when the bright lights come on and the big stage (i.e. major league ballparks) arrived, players would just turn it on. Don't say that you didn't hear it; everyone heard it. Now the Sox are in shell shock, and we haven't stopped watching, but they haven't started playing.

Sure, it's a marathon, not a sprint. But you have to leave the starting line.
Posted by Ron Sen, MD, FCCP at 10:19 PM No comments:

Short and Not So Sweet

The Sox played two games poorly, with bad pitch execution. The best description I've ever heard was by an old-timer, former White Sox and Red Sox pitcher Gary Peters, "wild IN the zone". You throw stuff in hitters' sweet spot and they make you pay. This ain't rocket science.
Posted by Ron Sen, MD, FCCP at 11:26 AM No comments:

With the NCAA Men's Final Four and the Sox on, it's work to stay on top. But such are the travails of the sports fan.

David Ortiz eclipses Edgar Martinez as the all-time DH RBI leader, which is quite an accomplishment.

John Lackey hasn't throw the ball badly, but the Rangers have a lot of guys who can hit, from Andrus, Beltre, Hamilton, Kinsler, Cruz, and Young. Texas definitely has the capacity to make pitchers pay for mistakes. But let's not forget the likelihood that the spotlight will shine on Jarod Saltalamacchia, the signal-caller, not the hurler for the calls (is he getting them from Curt Young?).

Following up from an earlier theme, I don't want to overemphasize an inadequate sample size upon which to make judgments. For example, with a pair of homers in two games, David Ortiz is making his argument. Ergo, expect the fan base to start the clamor to 'lock him up'.

Conversely, Adrian Gonzalez looks pretty comfortable at the plate so far, with an 'easy swing' that doesn't look forced.

The Sox do seem a bit chirpy at the umpiring so far, but maybe that's an overcall.

Jacoby Ellsbury made a diving try in centerfield and got up none the worse for wear, we hope. As a Scott Boras client, he'll not doubt soon be the Ellsbury Dough Boy.

On the other hand, Don and Jerry seem pretty restrained in their (lack of) hyperbole with respect to the 2011 edition. You have to win the games on the field, and the projections don't mean a lot relative to production.

Nolan Ryan looks OLD, and he's not that old. Ryan's had some health issues in the past, and maybe running a big league club is more stressful than it looks.
Posted by Ron Sen, MD, FCCP at 9:39 PM No comments:


Stupid is as stupid does. The keyboard gladiators want to crucify and judge after one game into the season. Talk about snap judgments.

Yes, Jon Lester got a rare bite from the gopher, and Daniel Bard's birthright to the closer spot got vacated yesterday. But it's ONLY ONE GAME. Carl Crawford didn't solve the southpaws yesterday, and he couldn't jump twenty foot walls in a single bound.

We've got plenty to be optimistic about. First, Jacoby Ellsbury didn't look even remotely look as though he were made of glass. Second, the lineup foreshadowed the maddening pitch-consuming monster they're likely to become, with C.J. Wilson working hard to survive. Third, Adrian Gonzalez looked very comfortable at the dish, and fourth, David Ortiz drove a lefthanded cookie into the bleachers to tie the game late. Fifth, the disastrous relief appearance didn't belong to Jonathan Papelbon, whose ego will get stress-tested more than Irish banks.