Yankees Grab Teixeira; We Concede Nothing

The New York Yankees, desperate to make the playoffs, completed their "deal with the devil" agreeing to an eight year, 180 million dollar contract with Mark Teixeira. GM Brian Cashman surely will announce, "it's not about the money, but rather returning a championship caliber team to our fans who deserve one (for the outlandish money they'll be paying for tickets)."

The Yankees seem to have cornered the market on the high-priced spread, with Alex Rodriguez, Teixeira, C.C. Sabathia, and Derek Jeter all getting paid at least 17 million dollars annually, and recent free agent pitcher A.J. Burnett a mere piker at 16 plus extra large annually. The Yankees weren't content to pay only twenty-three million dollars in luxury tax, as they'll try to top that.

Fans across America are adopting the "Yankee Hater" culture, this one from Seattle.

Will Boston fans concede the season after the Yankees have gone Over the Hot Stove Top in acquiring the best two pitchers on the free agent market and the best offensive player?

We concede NOTHING. The Red Sox continue to develop outstanding pitching from within, with Justin Masterson, Michael Bowden, and Daniel Bard all within spitting distance of major contributions, and Lars Anderson the "Justin Morneau in-waiting first baseman" working his way rapidly through the system.

When asked whether the Yankees were simply trying to buy a championship, the Yankee GM simply replied: there are four signs of Alzheimer's Disease:
We concede NOTHING.
Posted by Ron Sen, MD, FCCP at 4:38 PM 2 comments:

The Hardball Times has a rating system to project player performance. Where exactly does Mark Teixeira fit on the non-Borassian ratings scale? 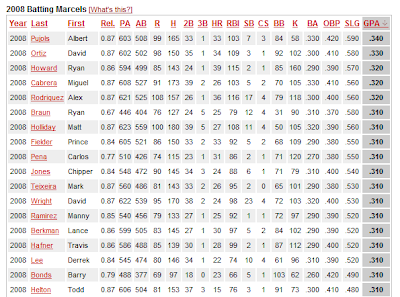 Using their scale, he's in the vicinity of the top 10 offensive players. No doubt that will translate into "mucho dinero" as 4 of the top 5 players are 'Latin' ballplayers.

I wonder how much Barry Bonds would cost...
Posted by Ron Sen, MD, FCCP at 3:10 PM No comments:

Mark Teixeira will be an excellent player, regardless of whether he finds a home in Boston or not. Just where does Teixeira fit in the hierarchy of MLB? 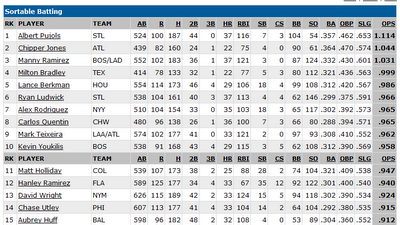 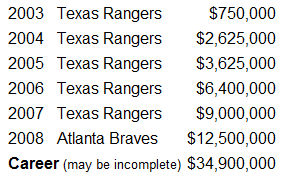 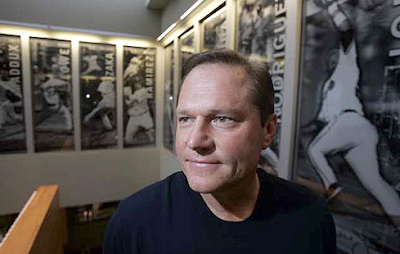 ...and visions of sugarplums danced in their heads.

What will the Red Sox lineup look like in 2009? The Red Sox are said to be in final negotiations with uber-agent Scott Boras for Mark Teixeira. You never know.

We'll never get him. It breaks the rule!

"I before 'E' except after 'C', or when sounded like 'A' as in neighbor and weigh (edited should be hit over the head with a Strunk and White)."

Or the exceptions:
"neither foreign financier seized either species of weird leisure." Or Teixeira.
Posted by Ron Sen, MD, FCCP at 8:41 AM 2 comments:

Tony Mazz has a new blog entry up, including the following:

"Somewhere along the line, someone needs to devise a system in which people who post comments on the internet are required to provide their real names and, perhaps, places of employment. This would help eliminate the legions of nitwits and cowards who shred anything and everything in their path while hiding in their mothers’ basements."

Columns center around opinions, and opinions sometimes derive from facts, but often from false beliefs that fail to distinguish causation from correlation. In 1968, Ken Harrelson had a 1.000 fielding percentage in right field for the Red Sox. Few observers thought that Harrelson was a Gold Glove outfielder.

The imprimatur of a major newspaper now qualifies a sportswriter as being infallible based on experience, access, and judgment. Other opinions based on statistics, close observation of professional sports for over forty-five years, and spectacularly unsuccessful college and amateur baseball careers count for nothing in a town where the scribes see all and know all.

Sportswriters have total objectivity. Baseball executives don't influence them, nor does their relationship with players and their families. They simply call it as they see it, oblivious to the impact on the team or the players, or even their access and careers. Or do they have a more nuanced view, colored by the realities of their position?

One former local writer told me he witnessed a player doing something ignoble prior to a game and the player simply told him that he would never talk to him again. "Sports doesn't build character; sports reveals character," was how John Wooden put it. The writer didn't write the story. The story just wasn't worth telling in the context of his relationship and his employer's relative to the big picture.

We have a passion for sports, the teams, and the competition. Writers measurably add to our enjoyment of the game. But their unique access doesn't always make them correct, immune from criticism, or invalidate their critics. After all, columnists are about opinions, not just facts. That's what they tell us.
Posted by Ron Sen, MD, FCCP at 10:36 PM No comments:

As the General Manager of a professional sports franchise (or any business) what properties do you value? Should the Red Sox be any different?

Putting together a list, I'd certainly include the following.

The mantle of greatness gets thrown around pretty easily these days. Back in the day, a mentor said it differently, "you fellas fish those waters pretty hard." Not much has changed.
Posted by Ron Sen, MD, FCCP at 10:00 AM 1 comment:

Tony Mazz Goes Belly Up After the Varitek Column

Tony Mazz with a big apology to readers for his overly ardent defense of Jason Varitek. It's not easy to acknowledge having erred.

As a physician, I have a regular seat at the humility table and as an ardent stock trader, it's simply daily dining.
Posted by Ron Sen, MD, FCCP at 6:24 PM 1 comment:

The Law of Averages and Aging Pitchers

The Yankees sign A.J. Burnett to a 5 year contract for 82.5 million dollars. What exactly is that likely to mean?

Here is a table of the five year records of some major league pitchers, in fact some of the best in recent history. Many pitched during the four-man rotation era, and many are or will end up in the Hall of Fame. Nobody would say A.J. Burnett is the equal of ANY of them. 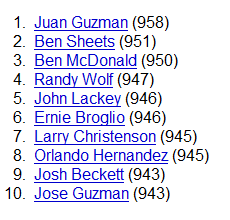 Here are A.J. Burnett's similarity scores from Baseball Reference. All of these pitchers are pretty good but how many would you want to pony up over sixteen million a year for, for FIVE years? As they say, "a fool and his money are soon parted."
Posted by Ron Sen, MD, FCCP at 10:54 AM No comments:

Today Tony Massarotti has a piece about Jason Varitek in the Globe online. There are two possibilities:
We are in the midst of the biggest financial crisis in the past seventy-nine years. Unemployment has surged, Americans are struggling as many have not in our lifetime, and the American standard of living is falling.

Meanwhile, Massarotti worries about how the Red Sox might be hurting the feelings of an aging star with declining skills whose principal worry is where his next twelve to twenty million dollars comes from.

Nobody questions Varitek's work ethic. We willingly grant him credit for his role in shepherding the Red Sox pitching staff through recent success, achievement earned through a greater focus on run prevention. Varitek has sacrificed his body for the Red Sox, from daily ice immersions to recovery from serious injury. But we also recognize that payment accrues for real and anticipated production, not solely for past accomplishments.

It really doesn't matter that many Bay Staters work far more hours than Varitek, for causes often more noble, teachers, nurses, public safety officials, and others simply just trying to feed their families, heat their homes, and educate their children. Virtually all of these residents didn't each earn forty million bucks the past four years.

Athletes and entertainers simply get paid on a different scale, as their performance is scalable, as their product attracts more paying customers.

We also realize the role of limited supply and demand for strength "up the middle."
Posted by Ron Sen, MD, FCCP at 8:41 PM No comments: