Stripes. A movie, animal skin, or something else?

Terry Francona has earned his stripes with a pair of World Series titles in five seasons. His success follows excellent players, supporting his veterans and promoting youth, keeping problems in-house, and maybe a little luck. Nothing wrong with that.

Zebras. That is, umpires. I think the calls on the bases are as good as ever, but the strike zone has begun to resume pre-Questek dimensions, with the outside corner not yet of Glavinesque proportions but getting there. Two consecutive replay days for homers for the Sox, but the locals went 0-2, although no way we could bellyache on the former, and we couldn't really tell on the latter.

Do you have to change your stripes sometimes? The Sox are facing numerous stripe-rearrangement questions?

I really liked what I saw of Junichi Tazawa in Spring Training (on television). He had an aggressive style, coming after the hitters, with a fastball with good movement and a better breaking ball than Daisuke Matsuzaka. He threw strikes.

Tazawa went to AA Portland, and what has he done lately? Let's focus on the appearances in May. 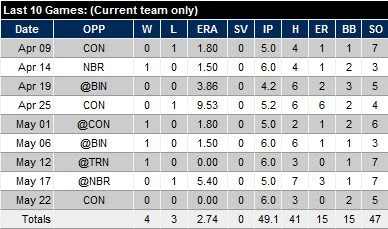 First, I like to look at WHIP (walks and hits per inning pitched) and K/BB ratio, that predicts ERA better than previous ERA itself.

In five May appearances, Tazawa has pitched 28 innings, yielding 21 hits, with 7 walks and 28 strikeouts. He has allowed five earned runs, with the WHIP ratio of 1.00 and the K/BB ratio of four.

No doubt the Sox are working on fastball command and secondary pitches, but it looks like Tazawa has already achieved dominance at AAA. Next stop Pawtucket. Obviously, we don't know Taz' support system (interpreter) et cetera, but the Sox need to assess his abilities against better competition.
Posted by Ron Sen, MD, FCCP at 1:13 PM 1 comment:

Red Sox Nation got a spiritual boost tonight with a two run homer provided by David Ortiz, his first of the season. Speculation raged over steroids, injury, or age discrepancy, but Ortiz, with tremendous support from Red Sox fans, delivered a blast into the centerfield camera.

Ortiz has been one of the most popular, if not the most popular Sox player for years, and fans shared Terry Francona's angst over Big Papi's struggles at the bat. He had gone from nightly hero to Mighty Casey almost overnight, with lunging, futile swings.

Meanwhile the Sox, who usually struggle against new pitchers teed off for five homers, a pair by Jason Varitek, and one apiece by J. Bay, Mike Lowell, and Papi.
Posted by Ron Sen, MD, FCCP at 9:39 PM No comments:

With four starters with ERAs over six (Lester, Beckett, Penny, and Matsuzaka), one has to scratch his head and wonder how the Sox have stayed close in the AL East. The Sox are 21-12 and only a game out.

But it's not difficult. Offensively, the Sox are second in the AL in scoring, about 5.7 runs per game, and the pitching is tenth in the AL in ERA. The Sox are sixth, however, in strikeouts to walks, and Red Sox data shows that K/BB ratio predicts future ERA better than ERA itself. Still, more telling is the Red Sox bullpen, that is third in ERA at 3.20 and leads the AL in saves with 11. With the AL overall bullpen ERA at 4.54, that's quite a differential.

This has translated into a 6-4 win-loss record in one-run games (good, not great) and their overall record exceeds their expected record using baseball's Pythagorean Theorem.

Certainly, we can't expect the bullpen to have the collective success they've enjoyed so far, but consistent offense and superior relief have allowed the Sox to survive mediocre starting pitching.
Posted by Ron Sen, MD, FCCP at 10:04 PM No comments:

The Sox play the Rays in the Game of the Week, and the Sox managed to keep Carl Crawford from stealing...as he scores from first on a two-out single by Pat Burrell. Crawford scored despite not running hard all the way...as I presume he thought Burrell's wall-ball was bound for the Monster Seats.

It's a big outing for Josh Beckett and the Sox, as Beckett has struggled and Matt Garza has looked like Bob Gibson circa 1967 for the Rays.

Before a national television audience, Terry Francona had the 'sense' to put Julio Lugo on the pine. Lugo's defense has been sorry so far this season...but he didn't pick up an error for his miscue yesterday. Unfortunately, Nick Green's defense hasn't been great either.

Hope is a four-letter world.
Posted by Ron Sen, MD, FCCP at 8:16 PM No comments:

Tonight Washington congratulates the Press on their stewardship of journalistic integrity in covering the White House.

Meanwhile, the Red Sox took the roasting at the hands of the Tampa Bay Death Rays. It was another Kazmir sweater for the Sox as the Rays pounded the locals 14-5. The good news was that a slaughter rule deficit never came into play.

A lot of guys had roles in the afternoon no-delight, particularly Julio Lugo, who continues to play Superman at shortstop, handling baseballs like kryptonite. The difference between Jed and Julio? There's no 'D' in Julio. Jeff Bailey misplayed a pickoff into an error as well, although not costing the Sox a run.

The sacks were loaded more often than Professor Irwin Corey for the Rays, and the Sox exchanged the Friday Red uniforms for waving white flags.

The Rays did show a little mercy, as Carl Crawford (three) had more hits than stolen bases, and didn't add to his stolen base or strawberry totals. Every starter for the Rays had at least one hit, making their mothers proud even before their day.

Good news? Rocco Baldelli went yard for the first time as a Sox, and Javier Lopez had a scoreless inning, after yielding a run in the seventh. Fortunately, Lopez didn't have any fielding 'testers'.

Seriously, baseball is about your 'body of work', not solely one loss here or there. Today was one of those "John McKay" days, when if Terry Francona were asked about the execution of his team he could answer, "I'm in favor of it."

Also note that the 2001 D-Backs, in addition to Schilling and Johnson, had Luis Gonzalez's 57 homer year, Jay Bell (2 years removed from his 38-homer season which came at age 34), Matt Williams...

My opinion on baseball or the Red Sox certainly isn't any better than yours. The only difference is that you may not have a forum to discuss your opinion. As we approach the quarter of a season mark, here are some thoughts and observations.