NESN just had a replay of an early April 2004 game against Toronto, Curt Schilling's first home start. The Sox won in extra innings. So what?

The Sox infield had Bill Mueller at third, Felipe Crespo at short, Mark Bellhorn at second, and David McCarty at first. Gabe Kapler was in center, and the last two Sox pitchers were Bobby Jones (the walk ace) and Mark (rhymes with Alaska) Malaska. The Sox won on a David Ortiz walkoff homer in extra innings. 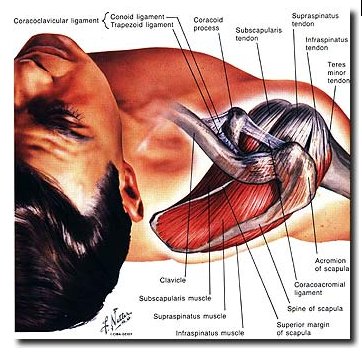 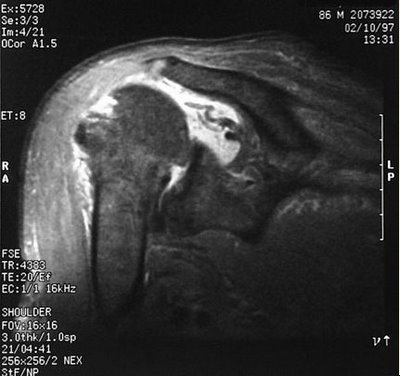 Nothing new on the J.D. Drew watch, although we can imagine that his shoulder MRI isn't normal... 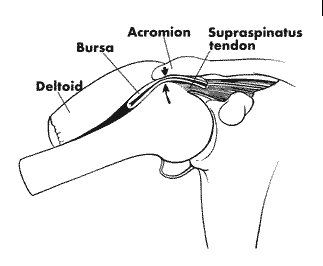 Injuries can occur from narrowing of the space between the rotator cuff elements and the bone (impingement), rotator cuff tendon degeneration, or injury secondary to trauma. A brief but informative review of the shoulder stabilizing system is referenced here. You too can talk about shoulder pathology, and know the labrum from a hole in the ground.

The bullpen battle should shape up to be one of the most competitive on the team, with three categories of players.

The Young and Unproven

I've got to give the early lead to the greybeards and Delcarmen (and his curveball), who had more good moments than Hansen, who seems to have yet to figure out which is his 'out pitch'. Peter Gammons seems to think that the Sox are high on Hansack, but Kyle Snyder showed enough (for the first four innings most games at least) to wonder where he fits.

The rotation possibilities include Schilling, Matsuzaka, Beckett, Papelbon, Lester, and Wakefield, whose versatility adds value, presuming that his back/ribs have recovered. In the 'can't count on him at all' category is Matt Clement, a nice guy by all reports who hasn't gotten much done in two years. The most important guy in this equation is Jason Varitek, who must shepherd Matsuzaka through the transition, help the other young guys, and remind Beckett that throwing harder won't get guys out in the AL.

With a lot of time on our hands, and not much news, let's think back to 'signature' moments in current (and recent) Sox players' careers.

Jason Varitek provides reliable if often unspectacular play behind the plate. In the 2003 playoff series against Oakland, Varitek blocked the plate and ultimately tagged out Eric Byrnes. Sure, Varitek has had some walkoff homer action and a game-tying homer against Seattle (if I recall correctly), but I'll always remember his defense first.

Kevin Youkilis had the ninth inning two runner homer against Detroit last season to help the Sox win. I'm hoping that we don't hear too much of Youkilis behaving badly (surly) off the field to diminish his potential contributions on it.

Manny Ramirez has had a lot of moments, but I think his first inning homer off Jeff Suppan in Game 3 of the 2004 series was his greatest moment. Suppan just pulled down 42 million for 4 years, making Manny's contract look cheap.

Coco Crisp played hurt, but had the spectacular diving catch to left center in Fenway against David Wright. Let's hope that Coco returns to good health and a .300 average this season.

Trot Nixon may be gone, but his ninth inning two run blast off Roger Clemens in the epic Sunday Night Duel between Clemens and Pedro has to be Trot's signature moment for the Sox. We won't forget his three-run double in St. Louis in the series, but...

Curt Schilling has the bloody sock, Game Six performance at The Stadium. Need we say more?

Tim Wakefield's most memorable moment may be the 2003 homer to Aaron Boone, but he was never tainted in Red Sox Nation because he always contributed above and beyond the call of duty.

Well, that's a start as we all try to keep the Hot Stove burning.
Posted by Ron Sen, MD, FCCP at 10:10 PM No comments:

With Matsuzaka and Okajima aboard, and who knows about the future, maybe it's time to start some Japanese-English baseball 'talk'. I'm going to import directly from a number of sites, especially here.

Gammons on the Sox

At ESPN Insider, Peter Gammons talks about the support system available to Matsuzaka, as well as the "mean-spirited" Boston fans and a media which hopes for the latest Japanese import to fail. He also points out that the Red Sox are likely to sign Chan Ho Park (as possible closer), and that Manny Ramirez WILL be the Sox leftfielder this season.

As for the worst signing of the winter, "the Commissioner" notes the Royals signing of Gil Meche. He also does a post-mortem on the Mets' Scott Kazmir for Victor Zambrano deal, on the presumption that "little guys can't play."

The Sox acquire Brendan Donnelly from the Angels. Of note is Donnelly's number one comp on the "similarity scores" hit list, Scott Linebrink, for whom the Sox seemed to have lusted. For whatever reason, Phil Seibel didn't seem to be in favor, so he'll get a fresh start on the left coast.

For those who are wringing their hands about the absence of a closer, I'd remind them of one item - it's December 16th. Yes, we all remember the closer by committee theme, but the Sox still have months before opening day.

I'm fond of the issue of player accountability, in other words, do you need better players or your players to play better.
Posted by Ron Sen, MD, FCCP at 6:36 AM No comments:

Dice Water in Their Veins

It appears that the deal for Daisuke Matsuzaka is done. Time for the Berlitz courses to begin and the translation sites will prosper.

But at Reality Check, we are also about 'giving back'. So here's some key hints for the Dice guy as he heads to Boston.

The news highlight since the predetermined signings of J.D. Drew and Julio Lugo was Jason Varitek's appearance at a Celtics' game last week. And with the ticket prices in Boston these days, one wonders whether you have to be a multimillionaire to attend a game.

Meanwhile, back at the non-negotiation table, the rumor is that Scott Boras, Daisuke Matsuzaka's agent, has never made a counter-offer to the Sox' original lowball offer, whatever that was (greater than the GDP of Haiti). Or as the joke goes, "what's the difference between Scott Boras and a terrorist?" You can negotiate with terrorists.

If Matsuzaka's currently pulling in about 2.5 million (whatever that may be in yen), then not negotiating for a sum twenty times higher over about four years wouldn't make most players confuse Boras with Einstein, or even Steven Hawking. In fact, that might make Jody Reed's agent look less absurd (you may recall that Reed turned down a king's ransom only to get something more than a famous Cardiologist might earn).

Now for the good news. Sox fans will not have to learn Japanese, worship the ground beneath another ungrateful athlete, or vilify Theo Epstein or John Henry for spending a hundred million dollars on a player who will always be a frayed labrum or loose ulnar collateral ligament away from the dungheap of baseball.

Yes, Matilda, the Sox have become the mirror image of the Evil Empire, spending like drunken sailors while showing doglike affection to carnival barker agents. It almost makes you want to cheer for the Twins, Tigers, or baseball's bottom feeders, the Royals. Almost.

Of course, we can't really know what subterfuge and intrigue actually happens in the Fenway boardroom. Yes, we can speculate on the horse trading going on between Master Theo and Darth Boras, but we can't know. We can wonder whether John Henry shares his latest trend following algorithms with Mr. Big, whether Boras now knows whether copper futures will turn around or when orange juice has peaked. "Sell, Mortimer, sell."

Having never strapped on the leather in the big leagues, become lost in the Tiger Stadium infield, or been spiked making the pivot at second, we lack the qualifications, experience, and savoir faire to render hardball judgments. We can't know that Edgar Renteria was soft as a cottonball or that Cla Meredith just needed more seasoning. Bam!

Worse still, we the lowly fans, the great unwashed, dare to question the mighty Wizards behind the curtain. You get the point. We just wallow in dumacity* while the brass, replete with servers, spreadsheets, and unique formulae bring us title after title.

Signs that the end of the world is at hand -

Well, at least the games won't be lost because of terrible offense very often.

Hey, it's not your money.

Extra OF - Pena (among Manny, Crisp, Drew the fourth outfielder could play 100 games)

Fiscal irresponsibility has its price. Box seats in the Bronx go up a mere 40 bucks next year. Thank the baseball gods for the benevolent Sox, who never raise prices, while bringing us great VALUE every year. How does the saying go, "price is what you pay, value is what you get."

I'm sure that the Sox have some kind of trending value statistic, such as the projected win shares/dollar based on a three year moving average or some such statistical mumbo jumbo. We certainly don't believe that it's just reach into the free agent hat and pick a guy.

C - Varitek (should rebound from last season's underproduction) 8 win shares last season was a disaster.
1B - Youkilis a dollars/win share bargain
2B - Pedroia - can the guy cut down on his swing and improve his defense going to the right...I'll go out on the limb and say there's a problem here...although I want to be wrong
SS - Lugo - it's not the player that's the problem, it's the price
LF - Crisp - Crisp was hurt last season. Accept it. I would like the opportunity to train for a week and see if my 52 year-old arm is better than Crisp's...or I could ask either of my 18 year-old twin girls to throw against him.
CF - Pena - CF was his best position. Why can't the Sox accept that? Give him the job...if he stays healthy I say he hits 30 homers and puts up 24 win shares...on the cheap
RF - Drew - is he destined to be the fans' whipping boy or will it be Theo?
DH - Ortiz - simply eye-popping numbers

Is it enough? For once in this town, could we address player accountability, not just the ownership, GM, manager, or third base coach? Let's hope that health and performance mean reversion can be enough.
Posted by Ron Sen, MD, FCCP at 10:11 AM 1 comment: